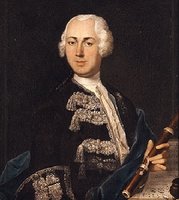 After Frederick became king, he offered Quantz in 1741 to become his chamber musician and court composer, Quantz accepted. At the Prussian court in Berlin and Potsdam, he taught Friedrich daily lessons, conducted house concerts and composed. He enjoyed the privilege of being allowed to criticize the king's play, and at times escorted him to the camp. Quantz remained at the court of Frederick until his death.

The compositions Quantz are for the most part intended for flute. Among them are more than 200 flute solo sonatas, about 300 flute concerts, 45 trio sonatas and 9 horn concerts.

Most of the works are only available as manuscripts, since only very few pieces have appeared in print. In his birthplace Scheden there are regular concerts with Quantz 'works. His textbook attempt to play a flute traversière (1752) is far more than a flute school. Rather, it conveys a comprehensive picture of the performance practice and music aesthetics of the late late Baroque.