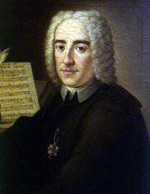 The Italian Opera Aria with Trumpet in the 17th Century

Early on, Italian operas contained stage directions pertaining to short fanfares and the like with trumpet(s). The Toccata preceding Monteverdi’s opera L’Orfeo (1607), a short, thrice-played announcement that the curtain was about to be raised, is the best-known example of this kind of trumpet participation. (Monteverdi’s example derives from still earlier theater traditions reaching back into the 16th century, whereby a trumpet ensemble blasted out a thrice-sounded, improvised signal before the raising of the curtain.) In many Italian operas of the 17th century, the trumpet was treated merely as a stage prop, or its natural harmonics were imitated on string instruments. It was not until near the end of the century that the trumpet as a true musical instrument became integrated into the fabric of the opera proper, either in sinfonias or in arias and choruses. Such use led to true competitions between voice (usually soprano) and trumpet, which became quite popular especially in Scarlatti’s and Handel’s arias.